Take a walk in Sopron with us.

Get acquainted with the historical city centre of Sopron with our help.

Let's begin the walk in the historical city centre of Sopron.

The image of the city centre was formed following the big fire of 1676. As usual with towns from the Middle Ages, the city centre of Sopron could be approached through gates within the castle wall only and the town had two main gates until the end of the 18th century only: and one of these was the Előkapu through which you can approach the main square.

The first stop on our way is the main square, one of the most beautiful squares of Hungary.

The symbol of our town is the Town Tower or as known for everyone: the Fire Tower.

The Town Hall was built next to the Town Tower.

Just opposite to the town hall, we can find one of the most beautiful buildings of Sopron, the Storno House (Fő tér 8.) in which King Matthew was accommodated in 1482-83.

Just next to the Storno House, another building is the Lackner House or the House of the General (Fő tér 7.) which was left to the town by the renowned mayor of Sopron, Kristóf Lackner in 1631.

Fabrícius House. This nice baroque house with its beautiful Gothic parts now accommodates the Roman stone storage and archaeological exhibition of the Museum of Sopron with a furniture exhibition of the 17th and 18th centuries at the street part.

County Hall. It was build according to the plans of Vencel HILD, between 1829 and 1834, a Classicistic building with columns. The back part of the building with the archives features an exhibition about the history of the town presenting original documents of the town as from 1162.

Kossow House. A typical baroque middle-class house. It is called "Little Castle" (Kleine Burg) as it accommodated King Ferdinand II in 1622 and 1625 (during the meeting of the Parliament) and King Leopold I in 1681. It was where Charles of Lorraine prepared for attacking the castle of Buda in the winter of 1684/1685. Gambrinus House It used to be the Town Hall until the end of the 15th century. From the iron fence along the house, we can see remnants of the Roman Amber Road.

Apothecary House. Its demolition was prevented by King Louis II by a Royal Prohibition Letter referring to the unity of the square. Now stored in the Archives, this Prohibition Letter is the first document on monument protection of the country and the pride of the inhabitants of Sopron. The house accommodated a pharmacy from 1642 to 1967 and now it is an apothecary museum.

The centre of the square is dominated by one of the most valuable statues from the Hungarian Baroque: the Trinity statue. Its specialty is that this statue contains the first external twisted column in Central Europe. We can see two kneeling statues depicting the two founders on the high pedestal.

Goat church. The church dedicated to Virgin Mary received its contemporary form at the end of the 13th century. Five parliamentary meetings and three coronations were held here. Its internal furniture is baroque.

Scarbantia archaeological park: the presentation of excavations of the Roman city behind the Town Hall with explanatory boards.

Central Museum of Mining, Collection of Forestry, Wood Industry and the History of Geodesy

Bezerédj Cottage. A beautiful and witty baroque palace the present facade of which was created in the beginning of the 18th century. It was where Franz Liszt presented a home concert in 1840.

Schreiner House: cannon balls received during the 1706 Kuruc attack was placed on the facade of this Templom street house.

Evangelical church. This church was built in 1782-84 following the Patience Decree of Joseph II in early Classicist style. This is the largest church of Sopron.

Roman Catholic Collection of Church Arts. Buildings of the Ursula Monastic Order from the end of the 19th century

House on feet built in the 16-17th centuries. The national medal biennale is organised here in the exhibition building of the Museum of Sopron here. It is a building with arches the arches of which were hidden in the wall and only a bomb attack made these visible.

Well of Maria built in the second half of the 18th century. It had serious injuries in the 2nd World War and its present form is rather a reconstruction

Cesar House: a building from the Middle Ages. The upper house of the 1681 Parliament met here and elected Pál Eszterházy a palatine. The legacy of József HORVÁTH is exhibited on the upper floor.

Előkapu (entrance gate): Remnants of the Eastern town gate. Presentation of the place of the one-time ponts-levis. The starting point of the castle wall pathway.

Old Synagogue from the Middle Ages. This was the first praying house of the Jewish community in the Middle Ages, probably built between 1300 and 1320.

Synagogue from the Middle Ages. It was built probably around 1370 as the private synagogue of Israel, a financier in Vienna who settled in Sopron.

Neugebeude a large residential building of three floors of 'L' shape in Copf style from the Middle Ages. The Jesuit convict and then the "Hungarian Crown" pension operated here.

Provost House. This baroque building from the 17th century was presented by Pál Esterházy to the Jesuit order.

Dean's House. The Baroque palace building was built around 1650 by István Vitnyédi who was the notary of the town of Sopron, lawyer and confidential friend of Miklós Zrínyi.

Saint George or Dome church, a Gothic building transformed in Baroque style in the 17th century.

Eggenberg House. We can find the arms of the Prince-Electors of Brandenburg over its gate and its yard is surrounded by a row of arcades on the first floor and a pulpit in front of the gate on the bottom part of which we can find the arms of the Hohenzollern family. The history of the Evangelical Church saw as an important mission the activities of Princess Eggenberg who received authorisation for the holding of Evangelical services which, otherwise, was prohibited in the town with the exception of the Lackner House. Therefore services were held in this yard between 1674 and 1676.

Its ground floor presents an exhibition on the journeys of Franz Liszt in the Liszt Salon.

Caesar House. (Back gate 2) It is where the upper house of the Hungarian Parliament met in 1681. This is where Pál Esterházy was elected a palatine. This building features a permanent exhibition of József Soproni Horváth, the big painter of Sopron.

Here we can see the building block of Franz Liszt Cultural and Conference Centre. From the West, the square is surrounded by the so-called Újhelyi House. This is the place where the building of the post office used to be and, before, Sándor Petőfi was in service here.

Post Palace; a memento in Sopron of outstanding beauty of the secession. Over its carved main entrance, we can see the Hungarian arms. It is worth to have a look at the glass roof over the reception hall together with the original Secession furniture.

Domonkos church. A beautiful building from the late Baroque.

In the Middle Ages, a moat used to be at this place and, following its being covered, tradesmen's houses were built up at both sides. The Maria column has stood at the Előkapu since the end of the 17th century. A church dedicated to Virgin Mary of the Towns stood at its place in the Middle Ages which was demolished in Turkish times for defence reasons. Commercial life of the modern town centres here.

Until the placing of the statue, the pillory of the town stood here.

Its forerunner under the name Golden Eagle was founded in the 17th century. Its contemporary furniture was prepared in the 1880s. Its facade is decorated with a maiolica manufactured in the Zsolnay factory in Pécs.

This small street leads to the brook Ikva. This is where famous craftsmen of Sopron lived, including clothmakers, dyers and tanners.

This part of the town was the home of citizens producing vine around the town who were called poncichters. A one-storey residential house at the beginning of the street accommodates the famous Zettl-Langer private collection.

Here we can see village-like producer's houses in this street which rises towards the church and which is built in in the form of a narrowing saw-tooth. - "The House of the Two Moors": a rare beautiful example of ethnicised Baroque architecture.

The Saint Michael Church is to be found at the highest point of our town. Its present form was created at the second half of the 15th century. We suppose that even King Matthew participated at its dedication.

Request your offer. It's simple and only takes a few moments. And your personalised offer lands in your inbox within just 24 hours! 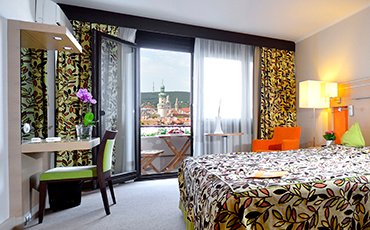 If you book your room on our own website, you’ll receive the following discounts

A cup of refreshment (coffee or tea)